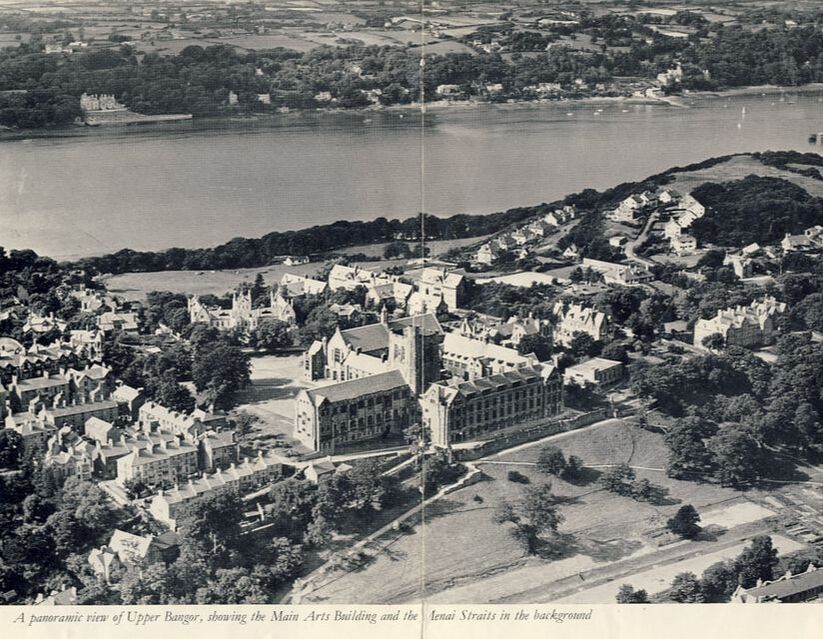 Michael’s Long Ago Travel to Ireland, Northern Ireland, Scotland, England, and France
This year (2020), I am spending the holidays alone, because my wife is visiting her new grandchild in the U.S. Virgin Islands, and the pandemic is keeping me from my children and friends.  It has led me to think about another year where I spent the holidays alone.  In my third year in university, I chose to spend it abroad at Bangor University (then called the University College of North Wales).

I decided to travel during the holidays, and imagined my trip would be uneventful. Instead, it was a great adventure, or a series of adventures. My goal was not to see sites or take tours but to find the cultures and meet people.  I left Bangor, Wales in mid-December. The entire trip was done by hitchhiking (except for some ferries), and I only stayed in youth hostels, except in Paris (more about that later).   At that time, youth hostels had a large room where all guests (of a given gender) stayed.  Beds were perhaps ten feet apart.  I had a booklet that told me where the hostels were located.

I went from Bangor to Holyhead, where I took the ferry to Dublin, Ireland.  I had a student guidebook that that told me to visit St. Michan's Church.  It said I should find the caretaker and ask to see the crypts under the church.  He took me down to see them, showing me various artifacts and such.  Then he came to the coffin of an actual crusader.  He invited me to shake hands with the crusader, and without hesitation, I shook the hand of an 800-year-old mummified crusader.  I am sure that the crusader is no longer available for such activities and is protected by glass or such.

The only other memory of Dublin from a very long time ago was my visit to the Guinness brewery and drinking a mug.  After Dublin, I traveled north, staying in a rural youth hostel before arriving in Belfast.

One evening in the Belfast youth hostel, there was a group of high school students staying there, and I began chatting with a 16-year-old girl.  When she realized I was American (I am sure it was obvious), she brought up the treatment of and bias against African Americans.  She was incensed that people could be discriminated against simply because of the color of their skin.  This was an awkward discussion for me, since I had been very involved in the civil rights movement, and did not want to defend my country.

At some point, I asked her if there were two shops next to each other, and one was owned by Catholics and the other by Protestants, in which one would she shop.  She immediately said the Protestant one.  She absolutely could not see any analogy between discrimination because of skin color and discrimination because of religion.  I have always hoped that my discussion with her opened her eyes to her own biases.  And I have dreamed that she ended up being a leader of the Irish peace movement.  Who knows?

After Belfast, I took a ferry to Ayr, Scotland, and later hitchhiked to Edinburgh.  In the morning at the youth hostel, an old Scottish gentleman spotted me reading the Herald Tribune (the international New York Times). He asked me what college I attended, and I insisted it was a small college that he had never heard of.  Nevertheless, he persisted until I told him Antioch College.  He immediately responded: “I knew that”.  He said that he had taught at the college, and we had a fascinating discussion.

From there, I went to Wolverhampton to visit my uncle Bob and family.  I recall him taking me to a pub where we insisted on buying each other beers until we consumed five (British) pints.  Somehow, we walked home after that.

Next, I hitchhiked to the Dover ferry, probably via a stop in London. From Calais, I hitchhiked toward the town of Amiens in the general direction of Paris.  At one point, a car stopped and asked where I was going.  I was clearly an American, so the husband asked in English.  I got in, but it was obvious that his wife was not happy to have an English speaker in the car.  However, as soon as I said “Joyeux Noel” (Merry Christmas) and said I could speak fair French, she was very happy and started talking away.   It was a lot of fun.

In Amiens, I was dropped off pretty far from the youth hostel, so I started walking with my backpack, which the British called a rucksack.  After a while, a car pulled up next to me.  It was an old Citroën 2CV, which is described online as: “uncompromisingly utilitarian: simple to maintain, reliable, frugal, tough ‒ and astonishingly ugly.”  There were three young people inside who asked me if I wanted dinner.  I explained that I needed to get to the youth hostel before they closed for the night.  They said to get in.

It was Christmas Eve, and I thought being kidnapped was better than spending the evening alone.  So I got in.  As soon as I said “Joyeux Noel”, everyone began chatting.   They stopped at a nondescript building and said get out.  In the lobby, the receptionist said to leave my backpack with her.  I said it had everything I owned, but she said there was no choice.  I walked into a large hall with many long rows of tables with people eating.  They found one empty spot for me.  I looked around and realized that they had picked up all the homeless and disabled people.  Many were war veterans with missing limbs.  I ate my dinner.

Later a 16 or 17 year old girl came to my table and said that she had to talk with me, because she was going to be an exchange student in the US next year and wanted to ask some questions.  I insisted that I had to go to the youth hostel or they would close.  She found someone with a motorcycle who delivered me to the hostel.

The next morning the proprietress came into the large room of beds, and woke me and said: “La jeune fille de heir soir…”  That was all I understood, but I knew what she meant: The young girl from last night was here to see me.  I was invited to spend Christmas with her family including Christmas dinner.  They told me several times that French families never invite strangers to dinner and especially not Christmas dinner.  The conversation wandered between French and English because even then, my French was limited.  The day was a truly amazing experience that I could never have anticipated.

Then it was on to Paris.  A guidebook suggested a particular hotel, and I found my way there.  The room was cheap, but when I asked the manager to see the room before paying (as my mother taught me to do), he looked at me and said:  “What are you, English?”, and I said “No, American”, and he responded: “That is not much better.”  I departed and walked blindly until I found another modest looking hotel.  Here the manager never asked me to pay in advance, and took me to my room.  When I opened the shutters to the window, I looked out at the Notre Dame Cathedral directly across the Seine River.  The cost  -- $1.70 a night.

My grand adventure ended by hitchhiking back to Wales.